Skip to content
Cart
Hay shed fires are a fodder producers’ worst nightmare.
To start with, it is difficult to monitor continuously and accurately the temperate of a stack.
The uncertainty can be stressful and ongoing vigilance time consuming.
That’s before there’s even a fire to contend with and all the associated costs with the loss and damage of hay and replacing the shed.
It was dealing with the constant stress of managing haystack fires on her family farm that prompted one French electronic engineer to develop a device to put her mind at ease.
Now this device is available in Australia, with interest from fodder growers and contractors wanting to safeguard their valuable bales.
Brad Petschel’s AutoElec at Hopetoun in Victoria has recently started selling the Haytech wireless hay monitoring system.“There’s a need for this technology in our local area,” Brad said.“There’s quite a few people growing hay and quite a few haystacks and sheds. There’s also the insurance element of it, with people looking to safeguard their stacks by being more on-the-ball with its temperature and recording changes.”
Haytech uses probes connected to the internet to monitor the real-time temperature of hay. A starter system includes 10 probes, with spikes of up to 40cm, which are inserted into square or round bales. The temperature of these bales are monitored through a free online service called Quanturi which sends messages to a phone if the temperatures reaches unsafe levels.The Haytech probes communicate with a base station and a repeater. The repeater works as “an extra security device” to guarantee a good signal transmission from the probes to the base station.
Brad said the system allows for the temperature of the hay to be plotted on a graph to demonstrate the changes.He hopes this new technology would provide insurers with more piece of mind when it comes to covering hay sheds and stacks.Haytech requires a 240v power outlet and good internet connection. If this isn’t available there’s a 3G/4G modem and solar panel system which can be purchased.
Western Australian farm technology business Farmscan has recently partnered with Quanturi to bring the Haytech system to Australia.“Rising temperatures can have catastrophic effects to hay quality, but with Haytech you can always be sure you are selling top quality hay and reduce the likelihood of product damage,” Farmscan marketing manager Jason Allan said.
Quanturi is a Finnish company founded by Nadine Pesonen, who developed the Haytech monitoring system on her family farm in France, and with her Finnish business partner they started selling the HAYTECH system more than five years ago.The Haytech system has been sold in Europe since 2016 and has prevented more than 200 haystack fires with more than 25,000 probes in operation in many countries.

As a special offer – AFIA members can enjoy a 10 per cent discount on any system purchased during 2020. Want more information & link to Farmscan's demo site in Victoria? – Please call +61 1300 327 672 or visit Farmscan online at www.farmscan.com.au 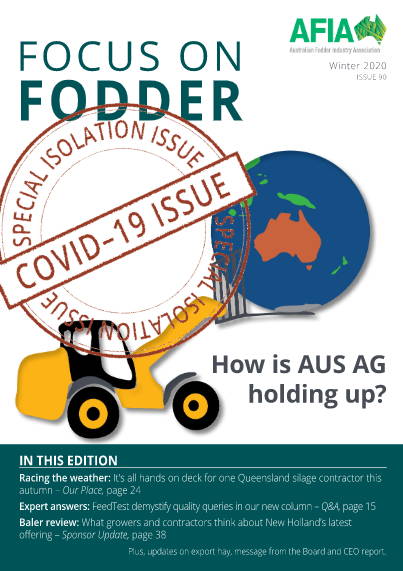 This article was originally published in the winter 2020 Focus on Fodder issue by the Australian Fodder Industry Association.
A digital copy of the full magazine is available online for reading.
Digital Publication
Back to Stories